This semester the workshop practice theory will focus on media practices of registration and identification.

The lecture and workshop series on Practice Theory aims to develop a new perspective on media history and media analysis. It is giving primacy to “practice” while focussing on processes of media production and work. We set out exploring media practices related to “coordination”, “delegation”, “registration & identification”,both with regard to a sound empirical foundation and to theoretical reflection. These categories are used to investigate media practices that specifically interconnect publics and infrastructures. Our lecture and workshop series on Practice Theory is dedicated to “Theoretical Empiricism” and will assemble international research that addresses questions of theory and empirical research symmetrically. For this purpose, three further categories are brought into play as part of the practice turn, namely repair work, experimentation, and actualization. 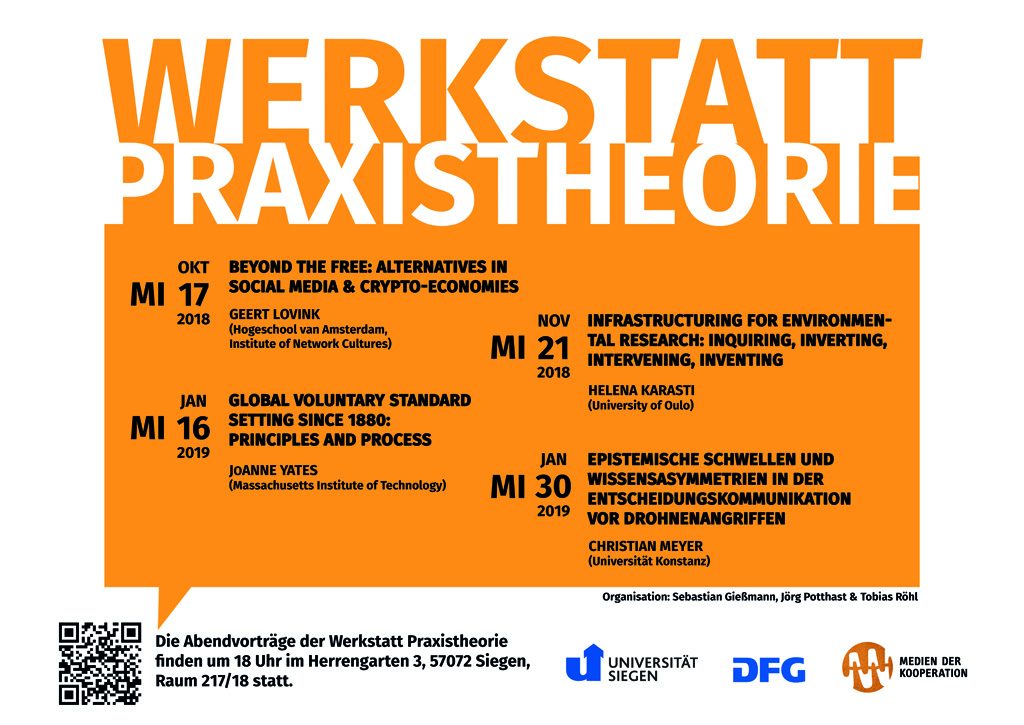 In this presentation I will give an overview of the recent work of the Institute of Network Cultures. How do we relate a radical critique of social media (our Unlike Us initiative) with efforts to design alternative internet revenue models (which we deal with in the MoneyLab network)? How can we get rid of the social contract of the ‘free’ and the related extraction model that Silicon Valley has imposed on us? How can artists and creative workers make a living in the 21st century now that copyright is dead and the decentralized value exchanges via blockchains are not yet in place? How can crowdfunding experiments, debates about ‘cashless society’ and universal basic income be linked? Can ‘federated’ networks become a viable alternative to the current centralized platform logic?

This lecture is based on my longitudinal research engagement with the Long Term Ecological Research (LTER) networks. I will reflect back on how I have constructed the ethnographic field and object of inquiry since 2002 and across multiple organizational, institutional and geographic boundaries. With my combined interest in ethnographic inquiry into participants everyday practices and participatory design approach for intervening, I recount how data and infrastructure came to matter in various ways, for example as information management, growing one’s own infrastructure and research infrastructure formation. From this background, I speak to ‘tight integrations’ of ethnography and participatory/collaboratory design and to extending the traditionally short-term and small-scale scopes of Participatory Design and Computer Supported Collaborative Work by ethnographically pursuing the sociotechnical phenomenon in question. Building on the work by Susan Leigh Star, Geoffrey C. Bowker and colleagues, I propose to study infrastructuring as it emerges through the dimensions of relational, invisible, connected, emerging and accreting practices, and through intervention and intentionality. I will end with some observations and experiences from our most recent investigation on the formation of pan-European research infrastructures for environmental research.

Private, voluntary standards shape almost everything we use, and have been critical to every major change in the world economy for more than a century, including the rise of global manufacturing and the ubiquity of the Internet. A social movement of engineers created this increasingly complex, worldwide system through three waves of institutional innovation beginning in the 1880s. The engineers initially aimed to prove their status as professionals by doing something that governments rarely wanted to do and markets typically failed to do — create useful standards. They created principles of balanced participation by multiple stakeholders and developed a process to reach consensus on standards that would be widely adopted by manufacturers and would satisfy the manufacturer’s corporate customers. By the 1920s, the standardizers thought of themselves as critical to national prosperity and world peace. After World War II, a second, increasingly international wave of the standardization movement transcended wartime enmities and Cold War divisions to create standards that made the global economy possible. Since 1990, a new generation of standardizers has launched a third wave, focusing on standardizing the Internet and Web and applying the same standard setting process to private regulation of the environmental and social downsides of globalization.

If ground forces request drones for air support in the event of hazard, their pilots face the challenge of securing the conformity of their own attack with public international law. For that to happen, enemy combatants (“military aged males”), weapons and hostile activity have to be identified. Multiple authorities take part in this epistemic communication. They are disseminated over the whole globe and have different states of knowledge and different access to media which again provide different information – e.g. through aerial camera shots. In this lecture I will demonstrate how the necessary knowledge objects get identified and ratified by distributed cognition based on medial information, and which role the sequential organizational dynamics play in deciding for or against an air strike.