Equal Opportunities & the Balance between Academic Work and Family Life

Career advancement and equal opportunities at the SFB

Supporting the career advancement of women, creating equal opportunities and reconciling science and family are a special concern of the SFB. The specialized support opportunities and coaching services are directed at female scientists and parents at all levels of qualification. In addition to the already well-structured program offered by the Equal Opportunities Office of the University of Siegen, we put together an individual event program for our employees at the beginning of each semester.

With regard to the support of families, the SFB works closely with the Family Service Center and makes use of existing childcare services at the University of Siegen. This is to guarantee that the researchers are able to undertake their work in the best possible way. For pregnant women, the SFB provides comprehensive support, and in the case of relatives in need of care, support is also provided in the form of student assistants taking on specific tasks within the framework of the SFB structures created for this purpose. Information is available from the Family Service Center of the University of Siegen.

We schedule events based on a needs assessment that you will receive at the end of each semester. Feel free to put down suggestions for new formats or topics on the needs assessment. Information on current, upcoming and past events can be found on our events page under Equal Opportunity.

Further handouts from the Equal Opportunities Office
(available only in German)

Although the benefits of equal participation of men and women in the research system are widely known, a great deal of research potential still remains unused at the moment. Women are underrepresented in top research positions. 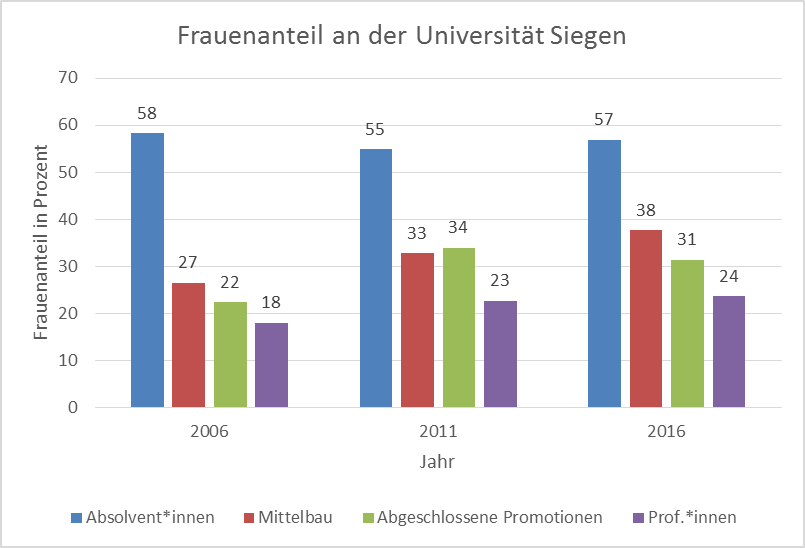 As can be observed, the proportion of women in the research system decreases significantly with the degree of qualification or employment level. One cause is the so-called “leaky pipeline”: although more young women than men start their studies, the proportion of women along the career ladder in universities is thinning out more and more. In the course of their careers, women are still confronted with a mostly invisible barrier, the so-called “glass ceiling”, which prevents them from advancing to management positions despite having high qualifications, while male colleagues with comparable qualifications usually ‘succeed’ in this advancement. In addition to the lack of access to informal networks, the causes are seen primarily in stereotypical role perceptions, according to which women are supposedly less suitable for managerial and leadership activities due to family obligations and certain characteristics attributed to them. A further relevant factor is the persistence of often purely male-dominated academic communities from which women are structurally excluded.

The “Equality of Men and Women in Science” has therefore been embedded in Section 1 of the DFG’s statutes since 2002.

After all, equal opportunities and equality pay off in many ways: it is only through equality that it becomes possible to fully exploit the existing potential for innovation and talent. Furthermore, diverse working groups have a positive impact on the quality of research due to the broader range of their members’ perspectives, experience and skills, and thus provide considerable added value.

The goals of the DFG’s equal opportunities program – a gender balance in the research system and the compatibility of family and academic career – thus not only serve to promote diversity and equal opportunities in the scientific system. They also promote Germany’s attractiveness as a research location, especially for highly qualified young scientists and scholars.

Reasons for the underrepresentation of women in research range from problems regarding the compatibility of family with a research career due to a lack of childcare facilities to specific structural conditions in the research system that make the field less attractive for women. These include gender differences in research funding, as shown by the results of a study commissioned by the DFG on “Gender Effects in Research Funding”: Gender Effects in Research Funding [https://www.dfg.de/download/pdf/dfg_im_profil/geschaeftsstelle/publikationen/studien/studie_gender_effects.pdf] (March 2012)

More information, data and facts on equal opportunities for men and women in science can be found on the DFG homepage at: