This semester the workshop practice theory will focus on media practices of delegation and experimentation.

The lecture and workshop series on Practice Theory aims to develop a new perspective on media history and media analysis. It is giving primacy to “practice” while focussing on processes of media production and work. We set out exploring media practices related to “coordination”, “delegation”, “registration & identification”,both with regard to a sound empirical foundation and to theoretical reflection. These categories are used to investigate media practices that specifically interconnect publics and infrastructures. Our lecture and workshop series on Practice Theory is dedicated to “Theoretical Empiricism” and will assemble international research that addresses questions of theory and empirical research symmetrically. For this purpose, three further categories are brought into play as part of the practice turn, namely repair work, experimentation, and actualization. 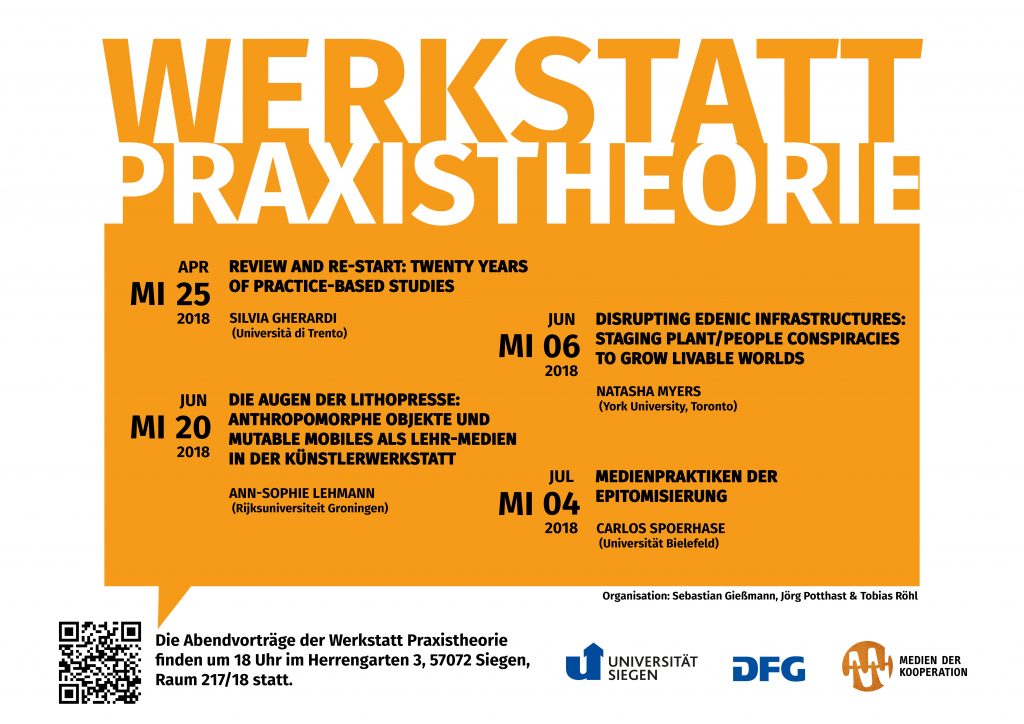 Around the 2000s there has been a ‘re-turn’ to practice theory, and the number of special issues of main journals in different disciplines testify its promise of a deep renovation in social sciences, after what has been called the ‘practice turn’ or the turn to practice. After twenty years we can track the effects of such a promise, keeping in mind that there is no such thing as a unified ‘practice theory’, only a body of highly diverse writings by thinkers who adopt a loosely defined ‘practice approach’.

The lecture and workshop propose to explore ‘practice-based studies’ as an umbrella concept and to retrace the way in which, over the years, I have developed a post-humanistic approach to social practice on the basis of an Actor-Network sensibility and the way in which the concept of practice appeared in the literature on learning and knowing in organizations. From this background, I illustrate an epistemology of practice grounded on relationality, multiplicity, and transformation, and I approach practice as an empirical phenomenon from the perspective of knowing as an activity situated in working and organizing practices. From this point of view the central interest in practice theories is how to bring forward a methodological framework to investigate the social, material, discursive, bodily, affective, aesthetic and ethical dimensions of practices.

In response to ongoing ecological catastrophes, artists, landscape architects, and conservationists are designing gardens with the hopes of restaging people’s relationships with plants. This talk juxtaposes the aesthetics and politics of divergent garden infrastructures. One response to the widespread acknowledgement of human impact on the planet is Gardens By the Bay, Singapore’s gleaming, billion-dollar infrastructure for what could best be called “end-of-times” botanical tourism. Another response is a series of works produced by Viennese artist Lois Weinberger. His “counter gardens” – plant-based durational installations and performances – challenge the moral order of Edenic gardens by inciting the subversive forces of weedy plants, and by celebrating waste, decomposition, and decay. Weinberger’s artworks, which invert and disrupt assumptions about the function of garden enclosures enact what Rancière might call a “redistribution of the sensible.” In so doing they offer a mode of critique for grappling with Singapore’s spectacle, showing how those gardens reproduce the very logics, discourses and practices that gave rise to the devastation they purport to denounce.