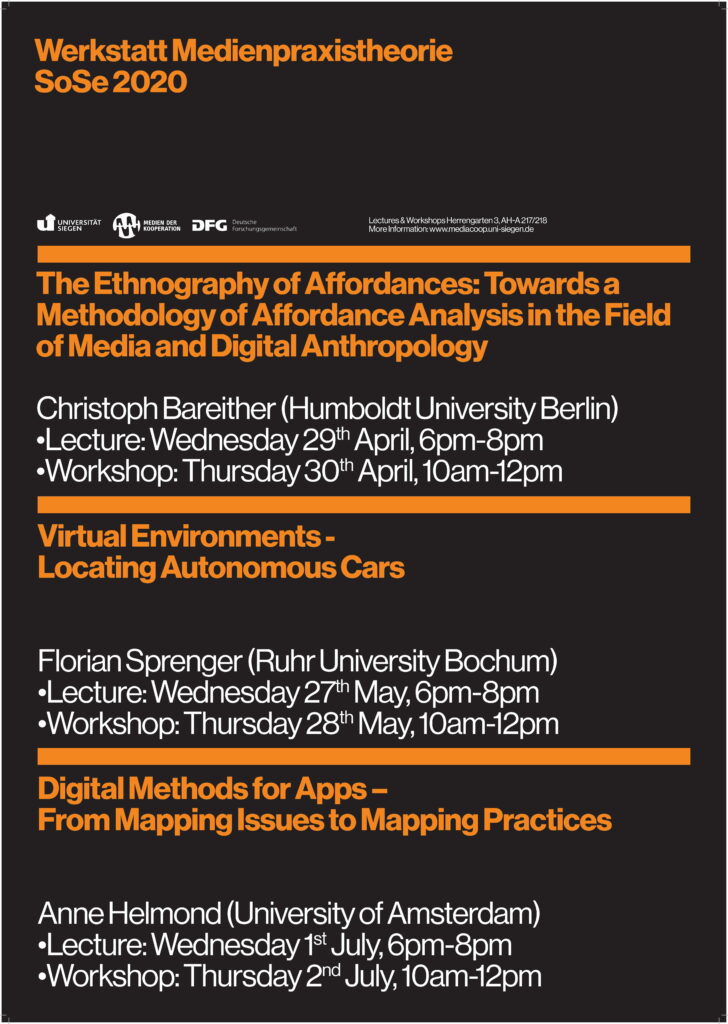 28./29. April 2020 - Christoph Bareither (HU Berlin): „The Ethnography of Affordances: Towards a Methodology of Affordance Analysis in the Field of Media and Digital Anthropology“

In recent years, approaches based on affordance theory have received significant attention in the field of media studies, especially in the transdisciplinary field of media and digital anthropology. Originally developed by James W. Gibson and then further conceptualized by various scholars (e.g. by Donald Norman, Tim Ingold, Stefan Beck, Ian Hutchby and Elisabetta Costa), the concept serves in numerous media anthropological studies today to describe relationally the potentials and restrictions of practice inscribed in technical and digital media. What is striking, however, is that despite the popularity of the affordance concept and a whole series of current theoretical introductory texts in various disciplines, there is a significant lack of attempts to develop a methodology of affordance analysis.

Building on my own ethnographic research with the concept of affordance, I would like to show several concrete ways in which affordances can be approached empirically. The starting point is a theoretical conceptualization of affordances, which does not understand them as static properties of technical objects, but always thinks of them in relation to media practices and, thus, also in relation to the incorporated knowledge – or, speaking with Bourdieu, the ‘practical sense’ – of the actors enacting them. Accordingly, the empirical approaches to affordances that I would like to propose are primarily ethnographically shaped. It is precisely in their relationality that the affordances of digital media can be made accessible through ethnographic interaction in both physical and digital spaces, for example through participant observation, qualitative interviews or through auto-ethnographic approaches. At the same time, ethnographic approaches to affordances greatly profit from media theoretical perspectives – this becomes all the more relevant the more complex the infrastructures and algorithms of digital media become. Implicitly, my talk thus also contributes to the discussion on the interweaving of media studies and ethnographic methods.

Christoph Bareither is Junior Professor of European Ethnology & Media Anthropology at the Institute for European Ethnology at the Humboldt-Universität zu Berlin. His research is concerned with the transformations of everyday practices and experiences enabled through digital technologies. He is especially interested in the fields of media and digital anthropology, museum and heritage studies, popular culture and game studies, digital methods and ethnographic data analysis, as well as the ethnography of emotions. As project leader and researcher at the Centre for Anthropological Research on Museums and Heritage (CARMAH), he applies the approaches of media and digital anthropology to foster our understanding of digital transformations in the field of museums and heritage. He runs the DFG-funded project Curating Digital Images: Ethnographic Perspectives on the Affordances of Digital Images in Heritage and Museum Contexts (with Sharon Macdonald and Elke Greifeneder) as well as the upcoming transnational research project Challenging

Using the example of autonomous vehicles, I would like to show that their autonomous behavior cannot be explained by the algorithmic transformation of inputs into outputs, but requires a concept that focuses on their temporality and mediality in order to explain their adaptability to an unpredictable environment. By virtualizing their surroundings, they localize themselves. Therefore, it is necessary to analyze more precisely how these environments are produced by technical methods of combining sensor data and filter algorithms. These methods produce the possibilities of alternatives, which underlie micro-decisions—in opposition to algorithms that are invariably determined.