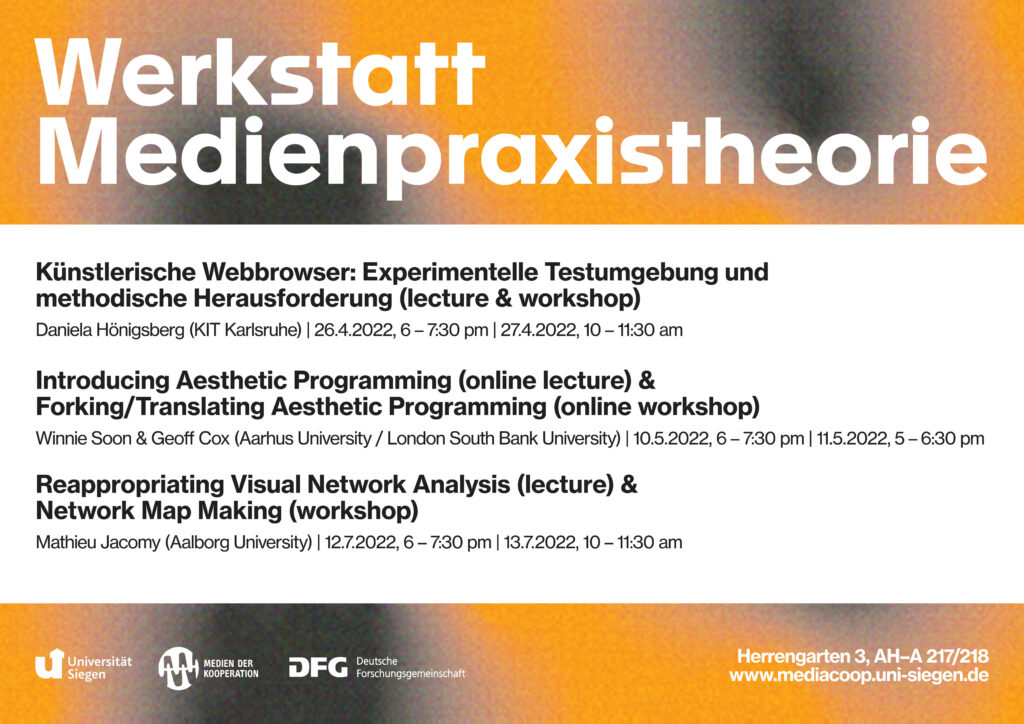 After the launch of the Aesthetic Programming book, we have recently formed a small working group to translate it into Traditional Chinese language, working closely with Taiwanese art and coding communities. The politics of translation has been well-established in general, but what of the specifics of translating a book such as this? Can we think of forking as a kind of translation, and cultural translation in particular? In the forking of Aesthetic Programming, we are curious to consider translation at the various levels of socio-technical operation – recognizing the many layers of translation at work when machines interpret instructions in their own terms. But how do problems of translation resonate more broadly when translating a book about programming that requires precision of language that is both descriptive and active/executable? What are the implications of drawing forking and translating together?

Geoff Cox likes not to think of himself as an old white man from a parochial island but is clearly in denial. At least other aspects of his identity are thankfully more ambiguous and fluid. Research interests lie broadly across contemporary aesthetics, cultural theory, software studies, and image politics, reflected in his academic position as Professor and Co-Director of the Centre for the Study of the Networked Image at London South Bank University, UK, and Adjunct at Aarhus University, Denmark.

Winnie Soon was born and raised in Hong Kong, increasingly aware of, and confronting, identity politics regarding colonial legacy and postcolonial authoritarianism. As an artist-coder-researcher, they are interested in queering the intersections of technical and artistic practices as a feminist praxis, with works appearing in museums, galleries, festivals, distributed networks, papers and books. Researching in the areas of software studies and computational practices, they are currently Associate Professor at Aarhus University, Denmark.

This workshop about visual network analysis is open to all publics, with or without experience with the discipline. We will focus on the mechanics of reading a network map, and from there understand how to build them so that they are useful in practice. The workshop is mostly tool-agnostic, but we will use Gephi, a free network visualization tool, as our tool of choice, for those comfortable with it. We will also address the issue of building a narrative about a network, and how to mobilize the multiple layers of mediation involved, and notably the layout algorithm. Finally, we will engage with (and discuss) Gephisto, an experimental tool designed to produce network maps in one click (but with a catch!). This workshop will make it clear what to expect and not to expect of network maps, how to make them well, how to interpret them properly, and how to approach visual network analysis as an operational practice.

Mathieu Jacomy is post-doc at the TANT Lab in Copenhagen, and previously was research engineer at the Sciences Po médialab in Paris. Jacomy tweets at @jacomyma